NEW YORK: Airstrikes at a Syrian airbase by the United States (U.S.) sparked protests in many U.S. cities on Friday, ARY News reported.

In response to U.S. President Donald Trump’s military action against Syria, protests in 20 different cities were held, two alone in New York on Friday evening one in front of Trump Tower while another at Union Square.

Protesters in front of Trump Tower

An anti-war and anti-racism campaign group ANSWER (Act now to Stop War and End Racism) organized the rally in front of Trump Tower. The organization has been devoted to opposing war, racist, and religious profiling.

The United States on Thursday night fired about 60 cruise missiles at a Syrian airbase in response to chemical attacks carried out by Assad’s regime against civilian population resulting in causalities of 70 people earlier this week.

About 60 tomahawk cruise missiles were fired from a number of warships stationed in the Mediterranean Sea.

David Havrenek, an organizer with the ANSWER Coalition, apprised foreign media that the president’s actions represented a continuation of what he viewed as the country’s questionable foreign policy.

“It’s not just about the bombings in Syria, but general U.S. policy in the Middle East, driven by greed and corporate benefits,” he said. “I think that not only is it wreaking havoc across the Middle East, but this issue affects us domestically because we are spending a lot of money, sending young Americans overseas to fight — that does not benefit the working class of the U.S. at all.”

Protesters holding placards inscribed with ‘No to War’

Voi Dipoko, a volunteer with the organization Refuse Fascism, was handing out fliers at the Trump Tower protest. She said she took issue with the fact that Trump acted unilaterally and has tried to deny, with his two executive orders on travel, the entry of Syrian civilians to the U.S.

“He’s bombing the Syrian people, the same ones the U.S. is turning into refugees, then banning them,” Dipoko said. “It sends out a clear message.”

Karen Lee said she attended the protest because she’s against the attack on al-Shayrat Airfield, and because Trump acted without consulting Congress. 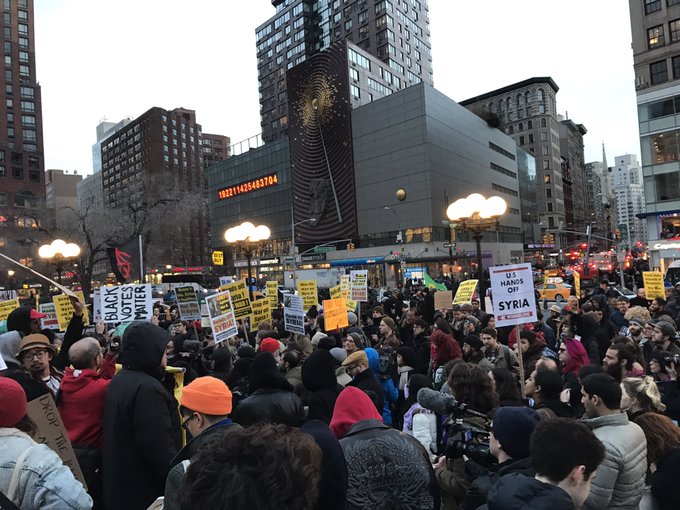 Following the attacks, on Thursday night, Trump remarked that the strike was necessary to maintain national security.

Zardari’s statement becomes riddle for all, PPP to investigate matter