(Web Desk) – A seven-year-old Indian girl filed a petition in Delhi High Court in a bid to save her neighbourhood park. But that’s not all. The girl also wrote a letter to Prime Mininster Narendra Modi in an attempt to stop local authorities from demolishing the park.

According to BBC, Navya Singh wrote a two-page letter to PM Modi explaining that, “Everyone says you will not read it because you receive 1,000 such letters. But I think you ll listen to me. This park is our lifeline.”

She concludes appealing to “Modi uncle” to help her “save her park” because “everyone says you re very intelligent”.

Navya also filed a petition in Delhi High Court, through her father, Dheeraj Khumar Singh, who is a lawyer, against the Delhi Development Authority (DDA) project, as a deprivation of the residents to have a place at the park to “play and get some fresh air.”

After listening to her petition last week, Delhi High Court judges ordered to stop the construction work at the park.

The park is located in the crowded area of west Delhi, a few minutes’ walk from the young girl’s home. She explains that the park is her “favorite place” and she’s been going there since she was “a baby” visiting the place, “every morning and evening.”

“I meet my friends there and play with them. We get on the swing, we play hide and seek,” she said. “I like the park a lot because it s got lots of trees.”

In June, the DDA began damaging the parts of the park and began construction activities, which surprised the residents of Rohini.

There are 14,000 public parks and open spaces in Delhi which are managed either by civic authorities, city government or by the DDA. Despite the poor maintenance of the parks, in densely populated city areas, they are popular spots for children to play and for adults to exercise or socialise. 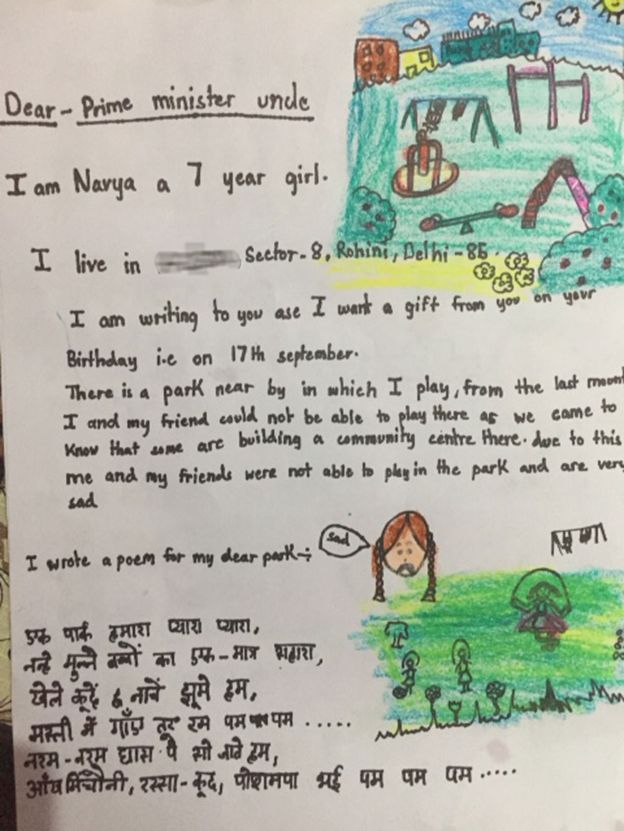 A number of the residents protested to prevent authorities from continuing the construction. The DDA later called the police to resume their construction work. From June 26, Navya and other residents couldn’t access the premises of the park anymore. It was barricaded and heavy machinery was brought in along with iron pillars were installed.

Navya’s father said that, “She was very restless. She asked me,  Where will we play now? Who can help us ?

“Since I m a lawyer, the only place I could think of was the court.”

Navya’s petition explained that the project is “a waste of public money” as community hall already exists with a few meters from the site of the proposed new hall. 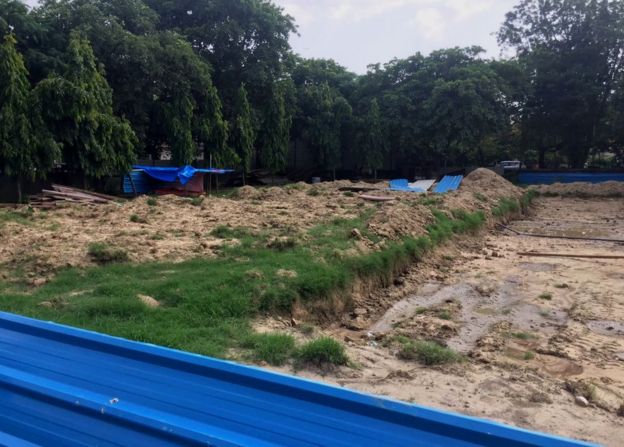 The authorities cordoned off a part of the park in June for construction work. Photo: BBC

“DDA cannot convert a park into a construction (site). You are playing with taxpayers  money… Parks are parks. Do not turn them into community centres,” the judges said.

Despite not being able to understand the complex legalities of the process of her filed petition, Navya and her friends have been able to return to the park. She hopes that with her letter to Prime Minister Modi, and her petition in the court, she might be able to reclaim the park.

NA-122 election rigged or not? Tribunal to give verdict

Let judicial commission decide whether rigging was done or not: Imran...

From the ruins of Awaran: The secular Baloch