NEW DELHI (Reuters) – The Indian capital declared a pollution emergency and banned the entry of trucks and construction activity as a toxic smog hung over the city for a third day on Thursday and air quality worsened by the hour.

Illegal crop burning in the farm states surrounding New Delhi, vehicle exhaust emissions in a city with limited public transport and swirling construction dust have caused the crisis, which arises every year.

The problem has been compounded this year by still conditions, the weather office said.

PM 2.5 is particulate matter about 30 times finer than a human hair. The particles can be inhaled deep into the lungs, causing heart attacks, strokes, lung cancer and respiratory diseases.

Residents complained of headaches, coughs and smarting eyes. Many stayed home and restaurants in some of the city’s most crowded parts were deserted.

“I’d like to assure people that the central government shall do everything possible to bring about improvement in air quality in Delhi and the Nation Capital Region,” federal environment minister Harsh Vardhan said as authorities faced criticism for failing to take steps to fight a problem that erupts every year.

The haze covered India Gate, a war memorial in the center of the city where Britain’s Prince Charles and his wife Camilla were due to pay respects in a two-day trip ending on Thursday. 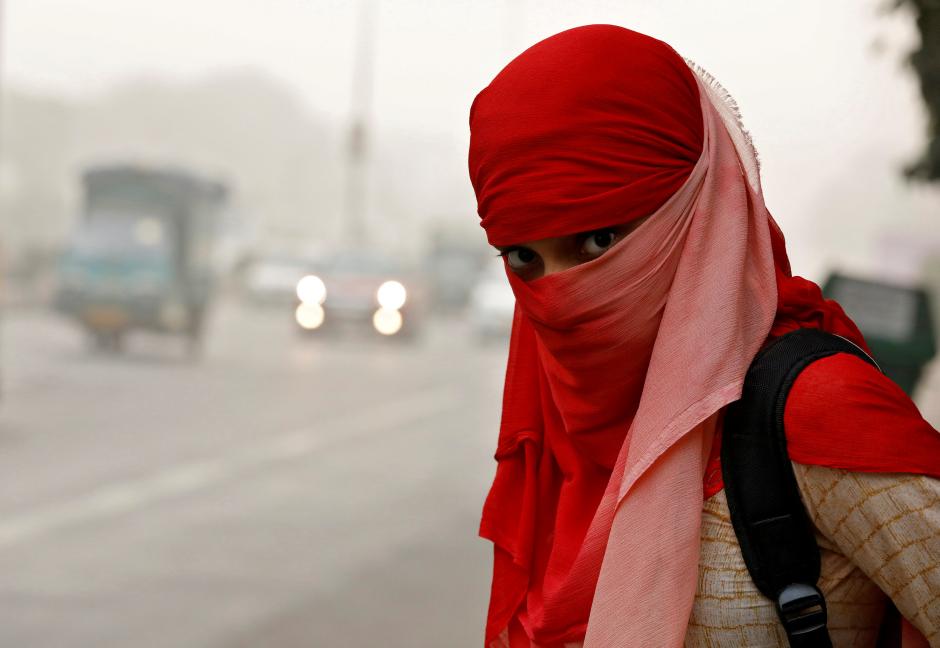 A woman wearing a scarf to cover her face looks on as she waits for a passenger bus on a smoggy morning in New Delhi, India. — Reuters

Schools have been shut for the week and late on Wednesday the city administration announced a set of measures to try to clean up the air.

Commercial trucks have been banned from the city unless they are transporting essential commodities, all construction has been stopped and car parking charges raised four times to force residents to use public transport.

The Delhi transport department said it would take a decision later in the day on whether to introduce an “odd-even” scheme under which cars with license plates ending in an odd number are allowed one day and even-numbered cars the next.

But experts said these measures were unlikely to bring immediate relief.

“There is such a cloud over us that you probably need artificial rain or some such to clear this,” said Dr Vivek Nangia, a pulmonologist at Delhi’s Fortis hospital.

Farmers in Haryana, where Rohtak is located, and Punjab, the two big agrarian states surrounding Delhi, burn millions of tonnes of crop waste around October every year before sowing the winter crop of wheat.

State authorities say it is hard to enforce the ban unless farmers, a powerful political constituency, are given funds to buy machinery to clear their land.

Punjab Chief Minister Amarinder Singh said in a Twitter post: “Situation is serious but Punjab helpless as problem is widespread & state has no money to compensate farmers for stubble management.”

Kim opens door to US presence in Pyongyang at nuke talks

Aisam admits season was ‘below average’