Zeenat Afza saw her whole world come crashing down when her husband, who worked in Saudi Arabia as a tailor, died of lung cancer in 2006.

However, buried in 1.75 million rupees ($1,6700) of debt and with four young children to support, the housewife had little time to grieve.

“When my husband passed away, everything finished,” she told Al Jazeera, while stitching in the living room of her first floor three-bedroom apartment on the outskirts of the eastern Pakistani city of Lahore.

The 53-year-old widow took a 10,000 rupee ($95) loan from Kashf Foundation, a non-profit microfinance institution (MFI), and started a small stitching business from home.

Microfinance, which emerged globally in the late 1980s as a tool for community development, is the provision of financial services to low-income entrepreneurs, including the self-employed, who wouldn t otherwise qualify for a standard bank loan.

Fond of stitching from an early age, Afza saw her hobby and a timely investment gradually steer her life back to recovery.

“My stitching pulled me out of very tough conditions,” said the soft-spoken Afza. “I ve been able to maintain my self-respect because of my work.”

With her loan size now scaled up to 75,000 rupees ($715), Afza makes dresses for local boutiques in her neighbourhood, as well as uniforms for the staff of Niazi Express Bus Service – a private company. 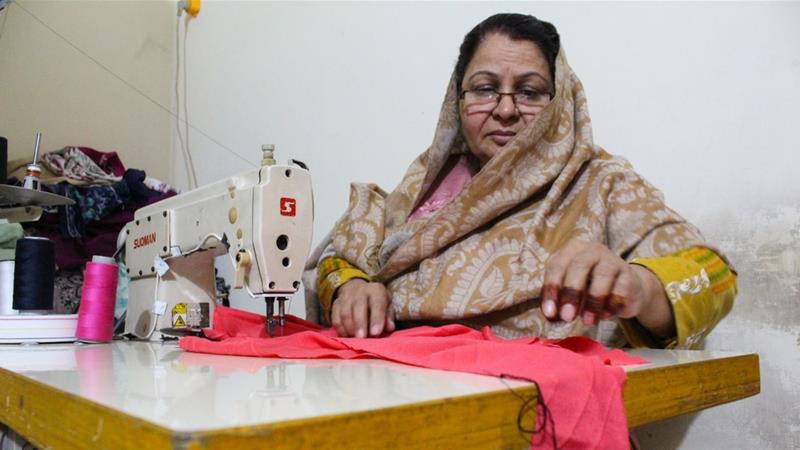 Zeenat Afza is among the 2.3 million women borrowers of microloans in Pakistan. Photo: Al Jazeera

“Microfinance is about giving tangible solutions to women to change their lives,” said Roshaneh Zafar, CEO and founder of Kashf Foundation, which gives 54 percent of its loans to female-led businesses.

“It s not just about advocacy or telling women their rights, but practically showing them a way out of their troubles,” she said.

Afza is among the 1.2 million women Kashf has helped in setting up small-scale businesses in its 20 years of operation.

Pakistan emerged on the microfinance map in the mid-1990s, but it wasn t until 2001, when the State Bank of Pakistan (SBP) – the central bank – passed the microfinance ordinance, that the sector became regulated and organisations got officially registered.

Since then, 10 microfinance banks and dozens of NGOs have been operating across the country.

An estimated five million people out of a population of almost 200 million borrow 170 billion rupees ($1.6bn) in microloans, according to the latest figures by the NGO Pakistan Microfinance Network.

Economic experts believe since the loan size is small, the industry is not actually making an impact towards alleviating the country of its nearly 40 percent poverty rate.

Saima Ramzan, 42, has been taking loans from Kashf since 2001 for her home-based baking business.

She makes wheat biscuits by burning logs with her husband on the rooftop of her father-in-law s house in the slums of Lahore to support her family of five.

But, the 60,000 ($570) loan she receives at a 20 percent interest rate is not sufficient enough to buy an oven and other baking utensils.

“We don t have any machinery,” she explained, sitting in her cramped 15-square metre bedroom. “These machines cost at least 100,000 rupees ($950), for mixing and blending eggs and sugar.”

“We can t afford that, so we have to mix with our own clean hands.”

Ramzan has requested for a bigger loan once her year-long installment is paid off, but is awaiting a response.

Razi Bibi is in a similar boat. Her 35,000 ($330) interest-free loan from Akhuwat, which has a total loan portfolio of 13 billion rupees ($120m), is limiting her car workshop business. 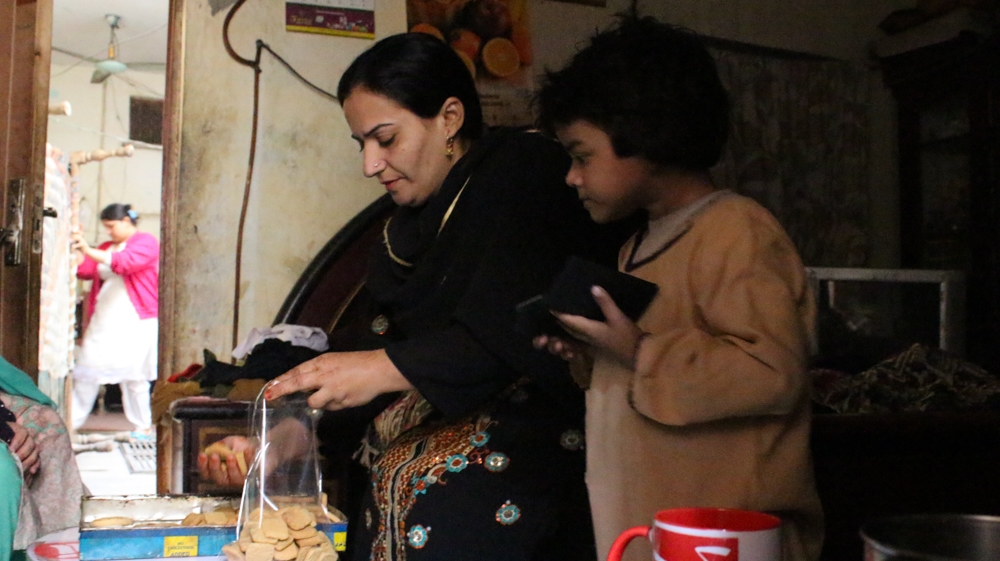 Saima Ramzan bakes wheat biscuits by burning logs with her husband on the rooftop of her father-in-law’s house. Photo: Al Jazeera

She prepares bearings for the engines of cars and motorcycles with her 18-year-old son in Lahore s industrial area of Kot Lakhpat.

“I have requested many times to please increase this loan amount, so that something comes out of it,” she said.

“Challenge is that I have too many orders, not enough machines,” Bibi added.

Rise and fall of Grameen Bank

Microfinance gained global recognition as a harbinger for the poor with the setting up of the Grameen Bank by Dr Muhammad Yunus in Bangladesh in 1983.

Yunus, who received a Nobel Peace Prize in 2006 for his economic venture, famously vowed to “eradicate poverty in a generation” through microfinance.

Despite its early success, Yunus s model of microcredit failed to live up to its billing.

Following controversies over exploitation of the poor, misappropriation of funds and violence against women, Yunus was eventually removed from Grameen by the Bangladesh s central bank in 2011.

Studies, like the Rise and Fall of Muhammad Yunus and the Microcredit model, criticise the sector s over reliance on donations and subsidies from external bodies for sustainability.

Abid Burki, economics professor at Lahore University of Management Sciences (LUMS), says the smaller loan size also increases the costs of the MFIs, such as Grameen, hence “hindering their performance”.

“I think financial sustainability will remain a challenge for the NGOs as it did with Grameen,” he said.

Microfinance institutions also admit that they face financial limitations, which hamper their ability to reach out to more poor people.

“There are around 20 million people in Pakistan who are looking for small loans and only 25 percent is the penetration of the microfinance industry,” said Shahzad Akram, chief credit officer of Akhuwat.

“So, there is a huge market, but due to the limitations of financial resources, we are unable to provide our services to the poor people,” he told Al Jazeera.

Others are sceptical about the practicality and the economic viability of the microfinance model.

“The inherent problem with microcredit is when you try to balance the development mission with the financial mission of an institution,” said Ghazal Mir, assistant professor at LUMS.

“That is an inherently unsustainable mission because when you bring in the profit objective, then it makes it difficult to focus on the client,” she added.

Microfinance sparked controversy across the border in India when the state government of Andhra Pradesh blamed more than 200 suicides by debt-ridden residents on micro lenders.

The 2010 scandal exposed the risk of over indebtedness and multiple borrowing by low-income households.

Credit information bureaus, documenting the details of small business owners, were put in place across India after the crisis.

With India s loan portoflio aggressively growing by 84 percent in the last year to 1 trillion Indian rupees ($15bn), researchers are warning of a repeat of 2010.

Seeing the fallout in both India and Bangladesh, microfinance practitioners in Pakistan say they have taken a more regulated and enterprise-focused approach.

“Ours was, I think, a very structured and regulated model, which meant that we had to look at all aspects of the business that we were undertaking, targeting the right people, reaching out to them, looking at child protection, and other areas which are part of any mature banking industry,” said Ghalib Nishtar, president and CEO of Khushhali Microfinance Bank, which gives 30 billion rupees ($2.8bn) to its 600,000 borrowers.

The State Bank of Pakistan launched a microfinance-exclusive credit information bureau in 2012 to allow companies to keep track of outstanding client loans and debtors.

But, economists say the intervention of the central bank in Pakistan has changed the industry s priorities, by commercialising it and encouraging for-profit banks.

“Their job is monetary policy – to ensure the health of the financial industry of the country and enhance the outreach of the institutions that they are responsible for,” she added. “So, they set a very different tone for the microfinance industry.”

The women s economic participation rate in Pakistan is 26 percent.

According to a 2016 UN report, approximately five percent of Pakistan s overall microfinance loan portfolio goes to female borrowers, who make up 50 percent of the clients.

And between 50 to 70 percent of microloans to women in Pakistan may actually be used by their male relatives, a 2012 World Bank report found.

In some cases, the woman needs a male guarantor or a bank account to be eligible for a loan above a certain limit. 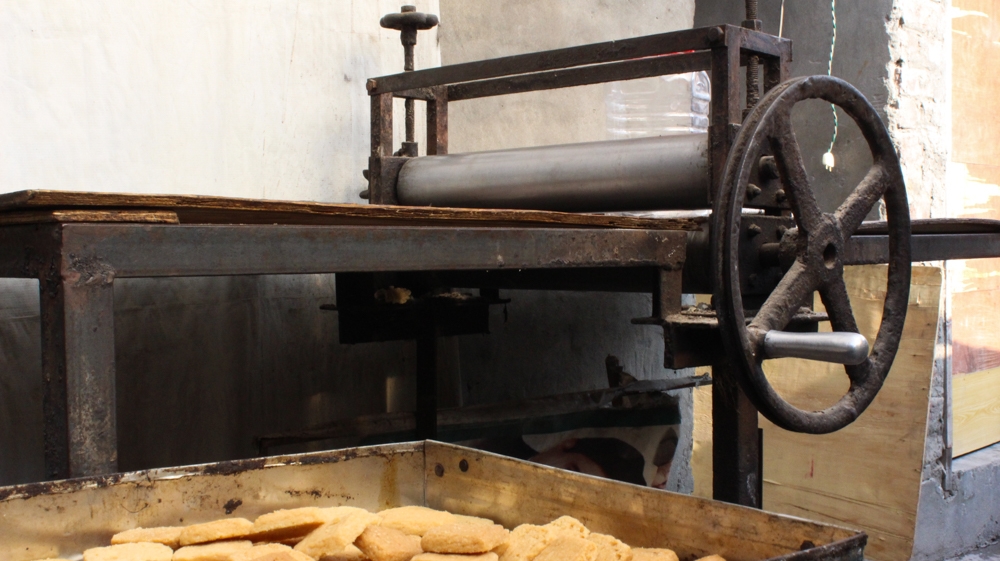 But besides providing credit, some organisations are attempting to adopt a more holistic approach by offering preliminary business management courses and financial training to homemakers.

When they [women] are told about their legal rights, are connected to organisations that work on physical education or give various skills training, that will have a higher return,” said Zaidi.

A woman s contribution to the household earnings also increases her importance in a “patriarchal” and conservative society like Pakistan, Zaidi went to say.

“The middle-class and the lower-middle class women will work because there is an economic necessity, so their household contribution is valued,” she said. “They have to go to great lengths, and their male family members will support them in going to these great lengths.”

“I think we have to appreciate that change is happening, women are working and male family members are supporting them to work.”

In some cases, the women are the primary bread earners of the family.

Yearly loans of 150,000 rupees from Khushhali Microfinance Bank enable Munawar to run her 18-classroom facility of 280 students and 13 teachers.

Encouraged by the success of her four-year venture, Munawar is now looking to expand her school to a girls  college and open another branch in a low-income area of Karachi.

Despite the success stories, experts say Pakistan s microfinance practitioners can do more to bring change in society.

“We need to make it more about the impact on individual lives rather than the profitability and sustainability of the institution,” said Mir. “Put people back in the centre and go back to the grassroots.”

Zaidi believes the sector has “an important role to play”.

“I think that unless the microfinance industry really takes a hard look at itself, it s not going to have as much of an impact as you would want it to,” she said.

Seoul says no plan for new round of inter-Korea talks

Hand grenade drone adds to IS arsenal around Mosul

Sartorial Word: Mantra for the trendsetting

Gazans bury their dead after bloodiest day in years

Will reverse all decisions with power of vote: PML-N leaders