Four Palestinians have now been killed and dozens wounded since Trump announced the new policy.

RAMALLAH, Palestinian Territories (AFP) – Fatah called on Palestinians to keep up their demonstrations over Washingtons policy shift on Jerusalem as the movement confirmed its leader will refuse to meet with US Vice President later this month in protest at the controversial decision.

After protests gripped the West Bank and Gaza for a third straight day, Israeli Prime Minister Benjamin Netanyahu was due in Paris on Sunday where demonstrators had rallied on the eve of his arrival. 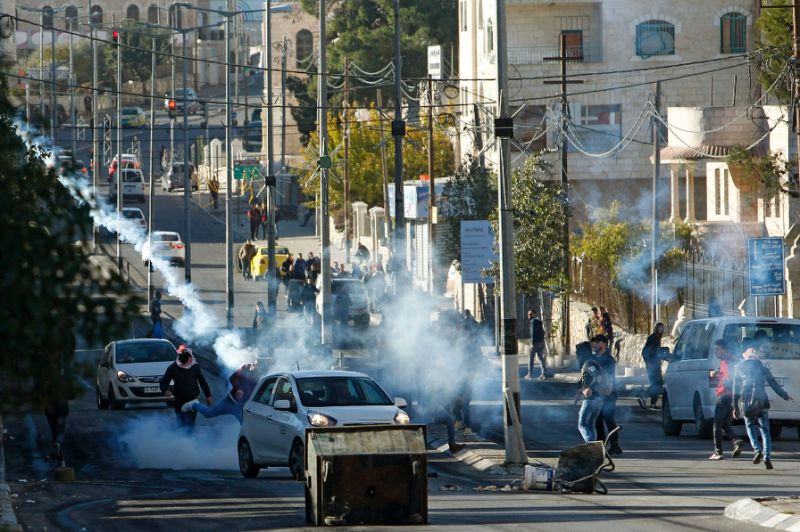 Palestinian protesters clash with Israeli forces near a checkpoint in the West Bank town of Bethlehem. — AFP

Four Palestinians have now been killed and dozens wounded since Trump announced the new policy, which drew criticism from every other UN Security Council member at an emergency meeting on Friday.

In a statement Fatah urged Palestinians to “keep up confrontation and broaden it to all points where the Israeli army is present” in the West Bank.

Its leader — Palestinian president Mahmud Abbas — also became the latest influential Arab figure to pull out of talks with Pence who will travel to the region later this month.

“There will be no meeting with the vice president of America in Palestine,” Abbass diplomatic adviser Majdi al-Khaldi told AFP.

“The United States has crossed all the red lines with the Jerusalem decision.”

Egypts Coptic Pope Tawadros II also cancelled a meeting with Pence, saying Trumps announcement had failed to take into account the “feelings of millions” of Arabs.

There were fresh clashes Saturday as Palestinian protesters in the occupied West Bank hurled stones at Israeli troops who responded with tear gas, rubber bullets and live rounds.

Retaliatory Israeli air strikes on the Gaza Strip killed two Hamas militants on Saturday while two others died near the border fence the day before.

Mourners vented their anger at the funerals of those killed while a bus was also stoned near Arab towns in Israels northern Wadi Ara district, injuring the driver.

Palestinian protesters clash with Israeli forces near a checkpoint in the West Bank town of Bethlehem. — AFP

The Palestinian Red Crescent gave a higher toll of 171 hurt in the West Bank and 60 in Gaza, with injuries ranging from gunshot wounds to tear gas inhalation and beating by security forces.

There have been fears of a much larger escalation of violence after Hamas leader Ismail Haniya called for a new Palestinian intifada, or uprising.

Hamas and the smaller Islamic Jihad militant group both renewed that call on Saturday.

Tens of thousands have also protested in Muslim and Arab countries, including Jordan, Turkey, Pakistan and Malaysia.

Saturdays pre-dawn air strike on a base of Hamass military wing in Nusseirat in the central Gaza Strip was one of several, the Israeli military said.

It said aircraft “targeted four facilities belonging to the Hamas terror organisation” a day after three rocket attacks from the Palestinian enclave into southern Israel.

Palestinians inspect the damage from an Israeli air strike on a a Hamas military facility in Beit Lahia in the northern Gaza Strip. — AFP

One rocket hit the southern Israeli town of Sderot but did not cause any casualties.

Israel had already responded on Friday to rocket fire with air strikes which the Gaza health ministry said wounded 14 people, including women and children.

The Hamas health ministry in Gaza said the two men killed on Saturday were in the movements armed wing, which has fought three wars with Israel since 2008.

Trump said his defiant move — making good on a 2016 presidential campaign pledge — marked the start of a “new approach” to solving the Israeli-Palestinian conflict.

But Washington has found itself increasingly isolated on the global stage.

Five European countries on the Security Council insisted the new US policy was inconsistent with past resolutions, including one declaring east Jerusalem to be Israeli-occupied.

The UN meeting was largely symbolic as no vote on a resolution was planned because the US wields veto power.

After an emergency meeting on Saturday, Arab League foreign ministers released a resolution calling on Washington to reverse its Jerusalem policy.

The decision is likely to impact domestic Palestinian politics, particularly between Abbass Fatah and the Islamist Hamas, now at a key stage in a fragile reconciliation process after a decade of bitter enmity.

Hamas, which violently seized Gaza from Fatah in 2017, is due to formally hand back power on Sunday.

Hamas spokesman Fawzi Barhum said Saturday the group “reiterated its commitment to all that has been signed and agreed upon and the completion of the handover”.

UAE, Turkish drones battle it out in Libya skies

Hong Kong protesters to rally after another night of violence

‘Move on Pakistan’ members should be charged with treason: Aitzaz

Suicide bomber kills 51 near Syria town taken from IS